Check out that purple background! I’m trying to imagine where a Portland Beaver would find that kind of cloudless, blueberry sky. A subtle plug for their state’s Growers Association, perhaps? 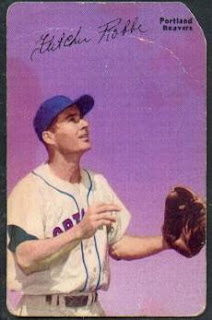 You see a lot of one-note card backgrounds in the late 40s and early 50s, as makers lurched shakily forward into the world of full-color photography. Mr. Robbe’s actually a hand-tinted black-and-white photo, not far removed from 1949 Bowman or 1952 Berk Ross. At least Topps’ own sets distinguished themselves with extra “features” like team logos and player positions.

My own collection includes a number of “modern” Mother’s Cookies cards, primarily Mariner sets from the early 1980s. I lived in throughout the decade and at least once per year, the team’s baseball card day gave kids a crack at glossy, round-cornered players of ’s own minor league team. (They played like it, anyway.) Check out eBay for complete sets, which usually run $5 or less. You can’t have too many Matt Young cards!

This 50s PCL card (with an extra rounded corner) cost me about $5, a pretty affordable sum compared to what they run in really nice shape. Most of the “better” cards have smooth arcs or slightly angled corners. See this store page for two grizzled-looking examples, including Lefty O’Doul. The sun clearly took its toll on some people!
Posted by Spike Glidden

This was the grandfather - I never knew him tho since he died in 1959, when my own father was only 9 years old.

I have this card in mint condition, though I never plan on selling due it being in the family since it was first released.