Anything prefaced by “W” in the card catalog means a strip card, so the W517s originally came in attached rows ready for cutting by a vending machine or scissors. Many examples, even the hatchet job that I own and picture here, show a vestige of dotted line along the edge. 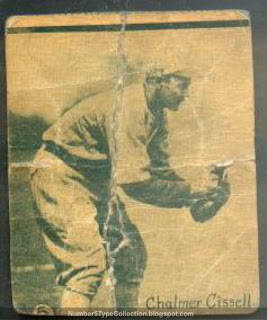 The 54-card, blank-backed set features real photos, a vast improvement over typical hand-drawn 1920s strip cards. You can find three forms of this set, large, small, and (what I've got) large-trimmed-to-small. The “mini” versions use the same image and proportions, but printed on a smaller paper strip. This probably made them cheaper to produce, a key consideration in the lousy 1930s economy. Multiple print runs created a handful of variations, including Mr. Cissell listed on both Cleveland and Chicago. 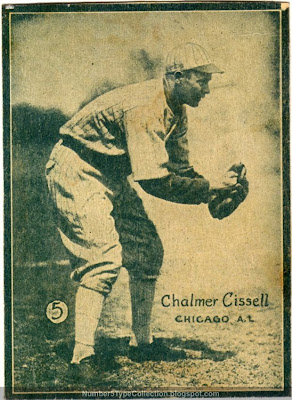 The W517s present a decent, collectible group of newspaper-like player photos. A recent Robert Edwards auction shows off both an original photo (of Babe Ruth) and the final product. While its overall quality lacks refinement, the set compares well to the dearth of interesting cards (and poor card stock) from that era. The rising cost of all the HOFers makes it pretty hard to finish, but at least you only need a few dozen cards to do so.