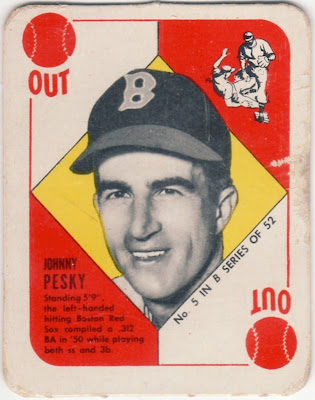 Card front
A few years back, my first trip to the Baseball HOF coincided with promotional showings of the movie companion to the book The Teammates, which features Boston's own Ted Williams, Bobby Doerr, and Dom DiMaggio. I live nearby, so am slightly biased, but the show’s collection of film, interviews, and chronology really pumped my enthusiasm for the game’s Golden Age. 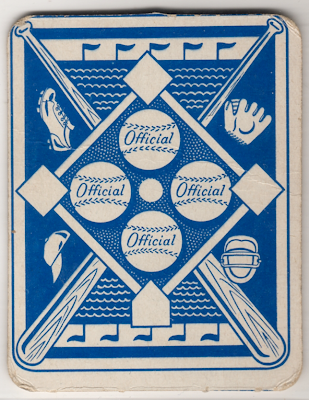 Card back
Like the more common Red Back set, Blue Back cards portray player busts hovering above a baseball diamond like disembodied gods. They’re also known as “Doubles,” as Topps joined two cards with a perforated edge for each penny pack. Set collectors could use the play results, like the “OUT” shown here, to hack out a tabletop game of baseball. This theme recurs throughout card history, starting as far back as the 1910s and continuing to my own childhood play, put into action with 1978’s card backs. When my vintage collecting group gets together, sometimes we bust out the 1951s—typically the easier Red Backs—for nine papery innings.
Posted by Matthew Glidden