Been away from this blog too long and yet still close to our hobby! This post covers my week at Chicago's 2021 National Sports Collectors Convention, from local sightseeing to show shopping. Let's go day-by-day.

My girlfriend arrived ahead of me to visit North Side cousins and I joined her Sunday afternoon. We checked into the downtown Athletic Association Hotel, a great place for dark wood rooms and old-school sports motifs. Their room key card even featured a Cubs Hall of Famer. 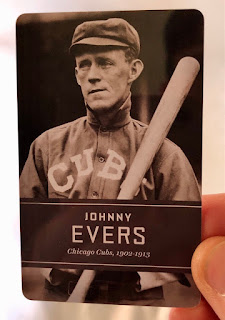 Five highlights for my pre-National days. 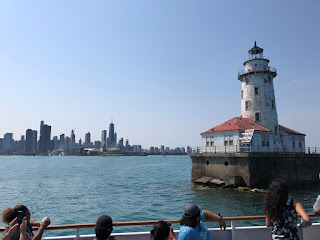 One regret: I missed seeing Nighthawks at the Art Institute. At least there's a Great Art Explained episode for it.

National dealers start setting up on Tuesday and I understand a lot of money moves around as dealers sell to each other. Many come with shopping lists for their customers back home and I bet it helps to buy from colleagues before they spend five full days managing their booths.

After yielding three runs in the first inning, the Dogs clawed back to tie things in the sixth and won 4-3 in the tenth inning on an infield hit, sacrifice, and double. My friend Sal was over the moon to learn that Chicago's league does not start a runner at second base in extra frames. ("That's real baseball!")

I helped a dealer with Wednesday setup, so arrived about 10am and beelined for his booth. He dubbed me "sign guy," which meant scribbling long lists of complete vintage sets on bright-colored paper for people willing to spend several hundred dollars or more. He also invited me to pull any cards I wanted from a large box of 1980s cards and I went long on my boyhood favorite, Spike Owen. 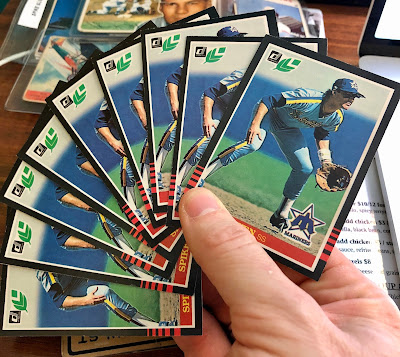 After a few hours of setup work, my own shopping got underway. One of my first buys proved a show highlight. 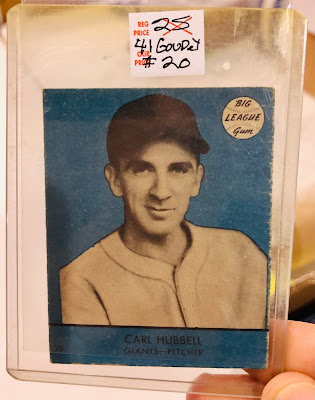 I spotted this 1941 Goudey Carl Hubbell, with its card number written as "our price." I asked that dealer to confirm and he said, "yeah, it's twenty bucks" -- about a tenth you'd expect to pay for one of that scarce set's key cards. No dickering needed, it was mine. (For comparison, I later picked up a 1941 Goudey Mel Ott for $120.) 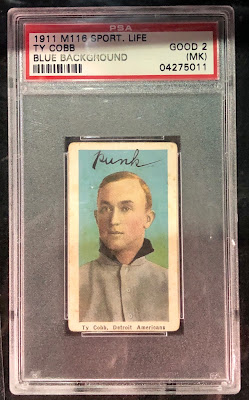 You see all manner of things at National booths, like someone scrawling their opinion of Ty Cobb on an otherwise good-looking prewar card. (I imagine some people did consider him a punk.)

The National show floor sequesters its low-tenure dealers to one end and that area tends to be heavy with UV. My oldest buy came from a prewar guy in its far corner. He kept some low-grade stuff in a box under the table, which yielded these $5 1920 W520 and W522 strip cards. 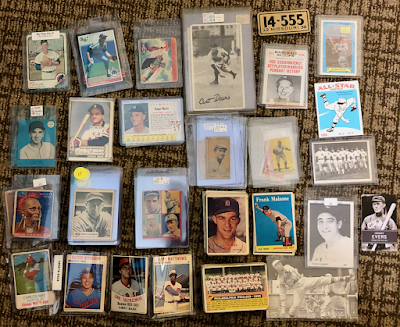 Wednesday's haul went beyond expectations, including a handful of 1936-37 World Wide Gum from a friend divesting himself of that scarce Canadian set. (More about it in my lengthy post about "Canadian Goudey.")

I spent most of Thursday using the program guide's map to walk its show floor row-by-row, in an effort to see everything at least once. Most booths took less than 20 seconds to confirm if they stocked interesting vintage stuff. Even at a brisk pace, it took me until Sunday morning (3+ days) to confirm I'd visited them all! 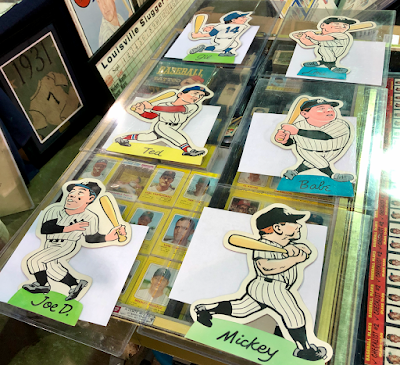 Along the way. I spotted cool things like these Robert Laughlin promo stand-ups. A steal at $500 each! 😮 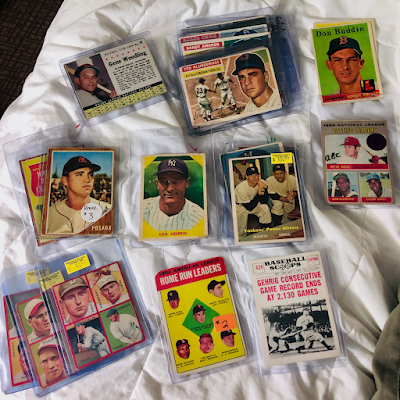 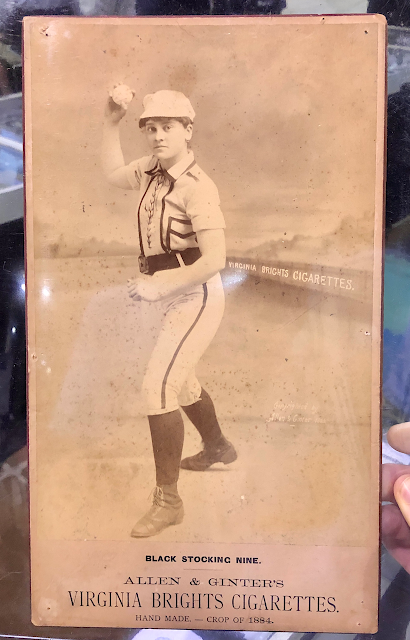 If I had big money to throw around ($5500), it'd buy this 1880s Black Stocking Nine cabinet card. They prove tough as nails to track down, so I considered it a win just to find and hold one. 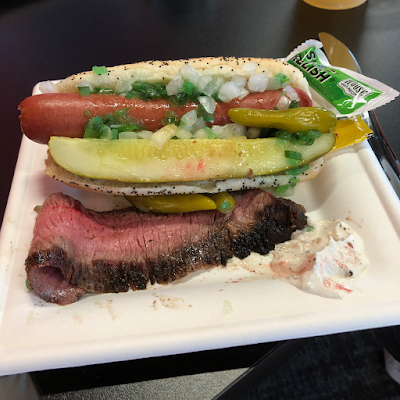 Speaking of winning, I made a return trip to watch the Chicago Dogs on Thursday and upgraded my food choices to include steak.

The morning's first purchase proved to be its best. I will buy boxes of 1950s Red Man cards in well-loved condition anytime you find one to sell me. 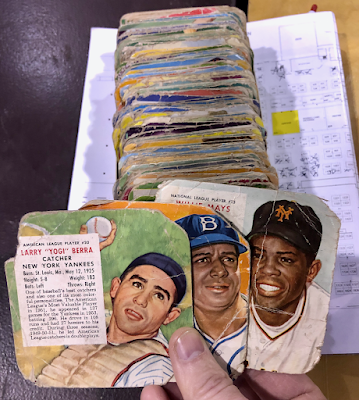 That round-cornered bonanza gave me a great start on 1954 and 1955 sets and I traded its duplicates to friends at our Saturday dinner. 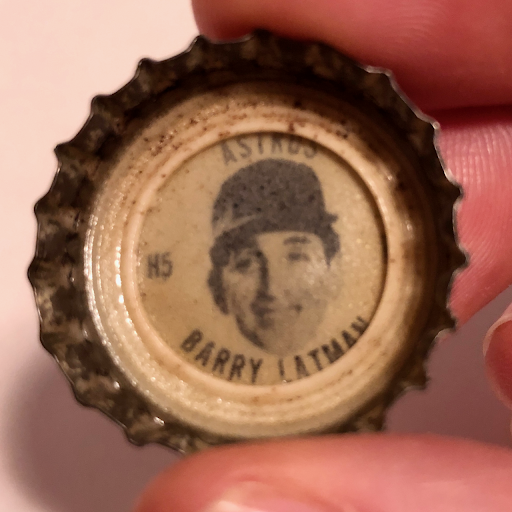 Friday found my first #5 type hit of the week, as a friend passed along this 1967 Coke Cap of Astro Barry Latman. 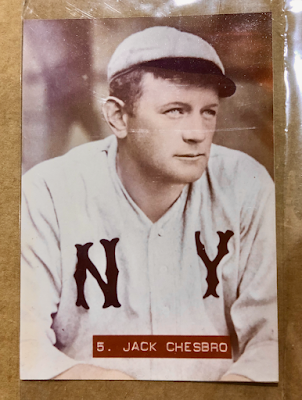 I later found 1974 Bra-Mac #5 Jack Chesbro for $4 in a binder of similar photos. His "red label" design resembles other Bra-Mac sets from the same year. 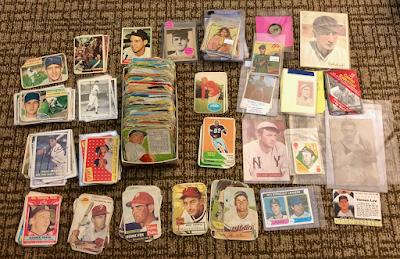 Friday's haul ran the gamut from prewar to 1974. A friend pointed out that the bio on that 1952 Topps Eddie Waitkus card mentions his run-in with a violent stalker that almost killed him. 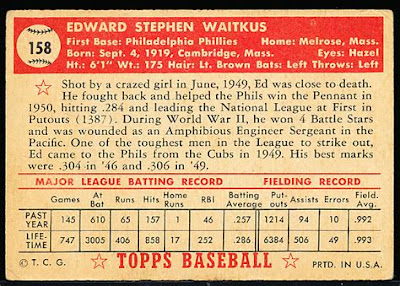 Eddie's shooting and recovery inspired, in part, The Natural.

My hotel roommates and I woke up in a funny mood and somehow decided that Tone Loc's "Funky Cold Medina" would be our weekend theme song. Who's to say it shouldn't be?

Many anticipated packed show floors throughout the week and Saturday delivered in spades. A growing number of attendees wore masks as aisles grew thick with other shoppers. A few dealers I chatted with talked about enduring COVID themselves during 2020, either solo or because it hit their whole family.

The day's attendance ebbed mid-afternoon, about the time its most popular autograph guests (Ric Flair and Hulk Hogan among them) finished signing for long lines of fans. This left more space around the 10 cent tables, where I spotted a card from my childhood. 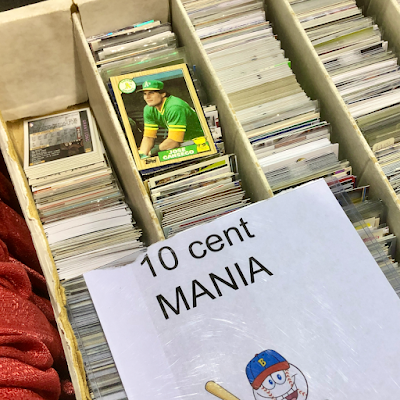 Those 10 cent boxes also yielded a pair of cards that mentioned a Mariners game I attended in 1979. They beat the Yankees so bad that night, every guy claimed a piece of the highlight pie. 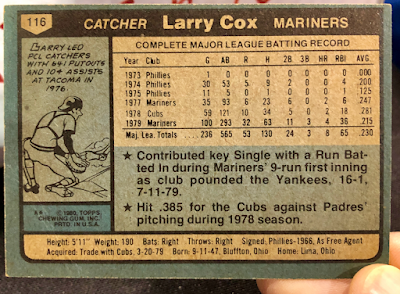 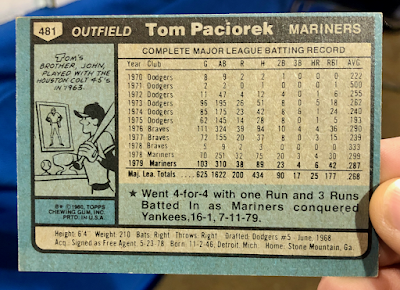 By Sunday morning, every dealer booth on my map showed a check mark, so I returned one-by-one to places marked for further investigation. When the dealer with Bra-Mac cards turned down my discount offer for its whole binder, I picked out my 25 favorites for their regular price. 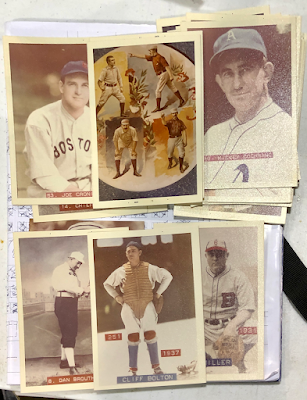 2021 marked the first time I stayed at a National long enough to feel the whole thing shutting down, which started about 2PM. Dealers started boxing up inventory and shoppers faded away right about the same time. I caught my own shuttle to the airport at 3:30 for a comfortable flight back to Boston. My pickup pile looks big when you lay it all out! 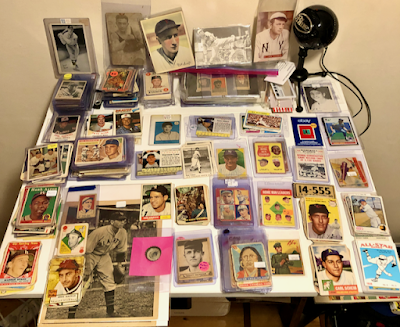 It proved educational to help out a National dealer for the first time. Stationed behind their table, you try to keep track of everyone, fielding questions from browsers and minimizing risk of theft. Sellers spend a disproportionate time talking with the minority of shoppers who want to chat, often as they hunt for a particular player or card set.

Next year, we'll be in Atlantic City, which I hear gives the National organizers such a good deal on space that it's almost free. Given its limited cultural appeal, compared to Chicago, collector enthusiasm depends on how close you happen to live to Atlantic City. 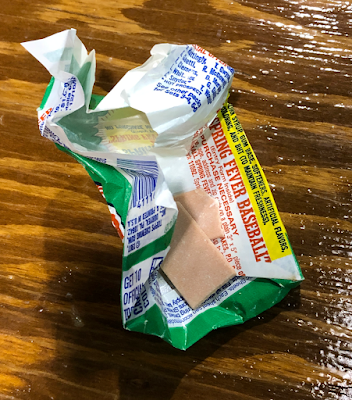 Spotted this discarded pack wrapper on my way out Sunday evening. New rule: if you crack the wax, you chew the gum! #ShowRules
Posted by Matthew Glidden

Wow! What a haul and awesome experiences.

Thanks! I keep worrying, "is this the National I can't find anything to buy?" Hasn't happened yet. :-)

Great stuff! Sounds like the Hubbell was a solid find. I never would have even known that was a deal until this post. The Canseco for a dime was a steal... and I would have loved going through that row of 50's Red Man cards.

As best I can understand that Goudey Hubbell, whoever priced it must've reflexively written the card number onto the price slot. When the time came, that dealer was caught up enough in other business to just go by the sticker. One of those lucky buys.

This is my favorite review of this year's National. Thanks for this. Love the 1941 Goudey card (I like this set more than some of the more favored Goudey sets). "Shot by a crazed girl ..." is the best lead-in for a card back bio ever. ... That "punk" Cobb card has style!