Placing all four sets in order proves tricky. Sea Raider Gum bears a © 1933 seal on the front, as does Big League Gum and some Indian Gum cards. Jungle Gum omits © and any dates. Some catalogs place Jungle Gum in 1930, which seems an obvious error, as chewing gum recipes suitable for packing with cards came along two years later. 1932 or 1933 makes better sense, given its similarity to those three dated sets.


Big League Gum card backs declare "made by the originators of Indian Gum," so we know Goudey released their western life cards before baseball. I think Indian Gum debuted in late 1932, thanks to this on-card reference and 1970 memories of an original 1933 collector.

Most 1930s gum companies distributed groups of 24 cards at a time, giving them flexibility to end production and avoid piling up excess inventory when kids stopped buying. It feels logical that Goudey and WWG released their four sets in this order.

Indian Gum and Sea Raider Gum share commonalities beyond their nostalgic (and often bloody) themes. One group of Indian Gum (#25-48) appeared with either blue or red banners, an exception to the red banner seen on all other series.

World Wide Gum printed Sea Raider Gum's first series in Boston and Montreal, followed by #25-48 just in Montreal. Their unusual combo of "Printed in U.S.A." and "Montreal" tells us WWG made a significant move during production.

Hobby tradition calls World Wide Gum "Canadian Goudey" as an assumed north-of-the-border subsidiary. Was it? I investigated that question in "What we call 'Canadian Goudey'" and found more nuance.

If World Wide Gum behaved as a subsidiary, you'd expect Goudey sets to appear in Canada. World Wide Gum seems more like the 1960s-90s Topps and O-Pee-Chee relationship. WWG created their own stuff, licensed what they wanted from Goudey, and left behind what they didn't.

I think this 1932 sale also kicked off World Wide Gum and plans for card production in Quebec to take advantage of Enos Goudey's Canadian connections. As shown above, Sea Raider Gum headed north mid-production. I find it interesting WWG licensed Big League Gum for 1933 and not Indian Gum, given that set's American success, and posit a theory why later in this post.

Yo ho ho and barrel of numbers
Cards printed in Montreal appear in English or English/French, as on this Pirate's Legacy treasure map. (Whether pirates ever made maps remains a separate issue.) 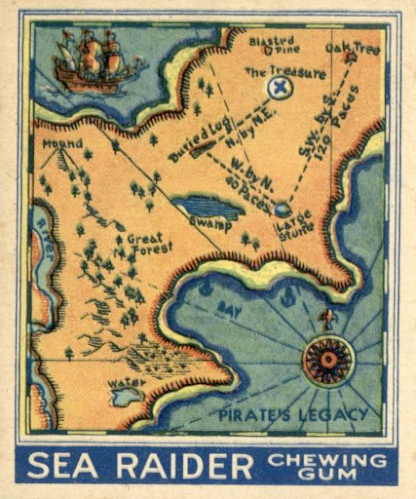 Look close at that text footer. Sea Raider Gum claimed "a series of 192," a common overstatement of set size used by Goudey and World Wide Gum in the 1930s. Its Boston wrapper claimed "series of 240." Was that indeed what they had in mind?

Indian Gum provides a comparison. As it sold more cards, Goudey accelerated set sizes throughout the decade, adding new groups of 24 cards with updated "series of" text on their card back footers.

Starting with "series of 192," which could well have hit stores in mid-1933, Goudey overstated the amount of available cards by a considerable margin. They also changed its approach to numbering, as "Series of 192" contains just 48 skip-numbered cards from #25 to #141, a clear attempt to imply kids could fill gaps that didn't exist.

Even after promising a "series of 312" by its last series, released around 1940, Indian Gum contains just 216 different cards. If you pursue a master set, many numbers include multiple back variations thanks to those series sizes.

While shorter at just 48 cards, Sea Raider Gum took the same approach. I bet this "series of 192 cards" coincided with an Indian Gum run of similar advertised size.

Kids like pirates and seafaring stuff, so I doubt Sea Raiders failed to sell. They're exciting just to look at!


Earlier, we asked why World Wide Gum didn't release Indian Gum in Canada, given its ongoing sales and growth in America. I think they lacked resources for multiple sets and ran into a unique situation that year. Their move from Boston to Montreal implies significant work getting a new location off the ground. I propose this 1933 timeline, based on Goudey and WWG sets released that year.

That fall transition to hockey would occupy World Wide Gum until they licensed more of Goudey's Big League Gum cards for springtime 1934. (Check out "Clue 7" in Jason Schwartz's An alternative history of 1933 Goudey for details of WWG's hybrid 1934 baseball set.)

I find it reasonable that 1933's baseball hype machine, driven by Chicago's "Game of the Century," kept Sea Raider Gum from going further. If Big League Gum sold at a more modest rate, we might've seen no WWG baseball and instead enjoy many more pirate cards today.

What about the set itself?


Most conceptions of pirate dress came from Howard Pyle's Book of Pirates, a posthumous collection of the prolific artist's seafaring art. Some Sea Raiders cards approximate Pyle's sophisticated scenes and others, like #13, copied him without hesitation.
It helps that Pyle's work remained popular across generations and you can flip through scanned editions of his Book of Pirates online. Much of WWG's art copied Pyle and others borrowed from 19th century etchings.
I use a Google spreadsheet to track Sea Raiders card art and welcome your help matching them to sources. Much of Sea Raider Gum's second series art could be inventions of WWG artists to make up for lack of available pictures by Howard Pyle. Many pirates exist as mythic or puffed-up figures, making their caricatures hard to verify as legitimate. Alwilda, for example, fares better as legend than pirate.

Stars of the set

Blackbeard, Captain Kidd, and other pirates of renown rank high with collectors. Kidd's own story runs thick with international and personal complications well beyond what a single card back can describe. 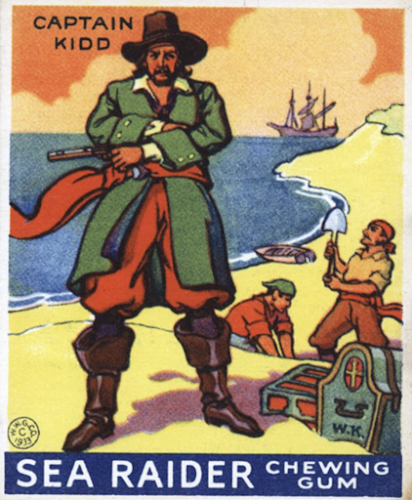 My #5 proved cheaper than a "star" like Kidd because it talks about pirate behavior and not an infamous character.


I think World Wide Gum's short run of Sea Raiders produced perhaps one-hundredth of Goudey's seven years of Indian Gum, based on what remains in the market today. A deep-pocketed buyer could acquire thousands of Indian Gum cards, some in large auction lots, yet collectors struggle to finish one series of Sea Raiders. Unless you enjoy years of hunting, I recommend sticking to a type card that appeals to you.

Value: Low-grade commons fetch $20 and higher, depending on its subject. Due to hobby scarcity and competition from map collectors, #45 Pirate's Legacy will run you hundreds for even a low-grade example.

Fakes/reprints: No set reprints exist that I know of. Some cards (like the map) fetch high dollar amounts, so could be vulnerable to counterfeiting. Stick to dealers you trust when looking for its pricier cards.
Posted by Matthew Glidden

I only have one Sea Raider (#33 John Evans) in my collection... but it's a cool looking card. If I ever found anymore at a good price, I'd probably pick them up.

Yeah, pick up anything you find! Looked for them at last couple of National shows without much luck. Feels like some of the large dealers must own a bunch or that many moved into slabbed collections.