This post features one of the rarest types a prewar collector could pursue, as made and distributed by Canadian dairy brand Crescent Ice Cream. Finding singles in the modern market for a foreign, prewar, minor league issue starts with at least two strikes against you. As of writing, I've never held its cards in person, just seen scans online.

Each of this set's 14 cards features a simple medallion design and #1 leads with their mascot, youngster Jack Lester. (Most "mascots" from early baseball meant a kid or dog the team treated as a good luck charm; our modern uniformed entertainers came later.) Cards #2-14 show players like Captain Daniels.


Card backs summarize this set and Hanbury's recent successes. Who doesn't want to lead in both baseball and ice cream? 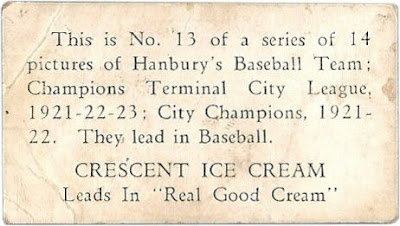 A feature on Asahi, one of British Columbia's Japanese teams, explains in brief how Terminal City League operated and why WWII forced players of Asian heritage to abandon league play.


This picture shows the kind of investment in trains and public works lumber required to reach its customers. Zoom in for photo details like three "Spear & Jackson Saws" buildings and a looming Hotel Vancouver at distant right. Though it no longer dominates Vancouver's skyline, the five-star hotel remains an impressive edifice. 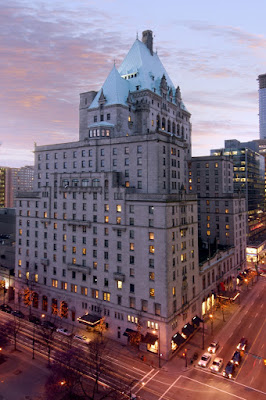 Crescent also printed hockey issues from this era featuring the Selkirk Fisherman, one of Canada's oldest junior league teams. Check out Anson Whaley's writeup for more on those sets. This gallery shows most cards from 1924-25.


Paulin Chambers and Crescent both offered "complete set exchange" promotions for their confections from day one. Later sets added redemption for a hockey stick. They each short-printed at least one card number to minimize complete sets (and thus, prizes given away).


Several baseball sets popped up in Canada during the 1920s, featuring players from many levels of competition. Pre-War Cards provides a list and commentary, including Goudey's well-known partnership with Ontario-based World Wide Gum.


Few 1920s Canadian card-makers broke new ground in design. Some, like 1922 Neilson's Chocolate above, just copied a stateside look to capitalize on baseball excitement without spending more money than needed.


All said, Canada's unifying 1920s baseball theme appears to be prize-swapping and that spirit carries on in modern pack redemptions. At least 21st-century collectors know they face long odds to pull something as cool as a hockey stick was to kids in those days.

Value: While few Crescent baseball cards exist in the hobby, a smattering of modern sales help estimate cost. Hake's auctioned a near set (13/14) for $462 in 2012 and several low-grade singles sold on eBay in 2019 for $50-200 each. With so few available for purchase, prices fluctuate based on the handful of collectors seeking specific cards. I expect to pay $50-100 for #5, if one appears.

Fake / reprints: On one hand, simple design and layout leaves this set open to counterfeits. On the other, with no stars and few aware of its existence, it'll be hard to fool its niche collectors with fakes and none exist in the marketplace to my knowledge.
Posted by Matthew Glidden