A decade-plus into my type collection, subsets of it are close to complete, if challenging to close out entirely. I'm almost done with 1940-49, made closer still by this latest Pacific Coast League pickup. With Al Lien's card in my pocket, I'm done with 1940s domestic issues! All remaining 1940-49 #5s are from Latin America and Japan. 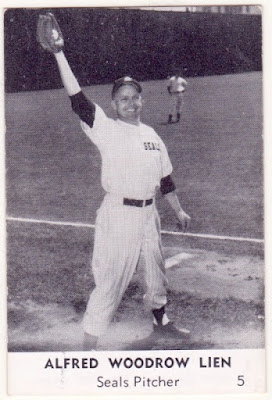 Smilin' Al's sporting the Seals pinstripe uniform, a typical choice when playing at home, compared to a team's plainer "road grays." I'm not convinced it's San Francisco's home stadium, though. 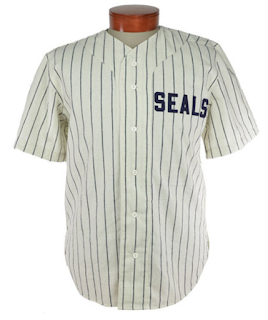 So where's Al throwing that ball around? The high left field fence over his shoulder doesn't look like SF Seals Stadium, which featured ads along that wall. Based on a look through available PCL outfields, I think that's Sicks Stadium in Seattle. Built in 1938 and short on MLB-class amenities like "water pressure" and "reliable toilets," Sicks still managed to host the Pilots in their ignominious 1969 season after three decades of Seattle Rainers PCL teams. 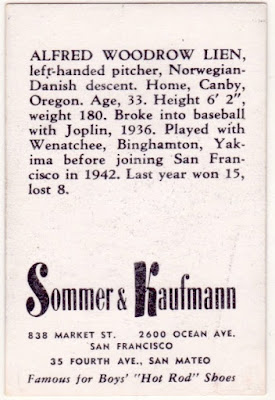 I wrote about Sommer & Kaufman once before, well before I owned the actual card. This scan shows its auburn tint better than that post's black & white scans.

What of the card itself? "Norwegian-Danish descent" describes a lot of my family, so perhaps we're distant cousins! Sommer & Kaufmann, on the other hand, sounds as German as "Ich bin ein Berliner." (German via American, that is.) Their store's shoes covered more than boys' feet, as evinced by these brand label pumps. 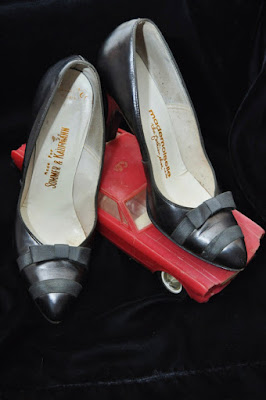 I think a single card printer created all of the Bay Area's minor league team sets and then branded backs with sponsor info. S&K's card design mimics contemporary PCL sets like Remar Bread (1947 set profile) and Smith's Clothing (1947 set profile), but Sommer & Kaufmann singles prove much tougher to come by. I'd seen just a handful prior to one of my favorite dealers breaking up a complete set in mid-2017. That kind of thing won't happen every day, so don't wait if you get a good shot at a type card from a dealer you trust.

Value: This EX card cost me $80, at the high end for commons, and my price paid reflects its scarcity and the hole in my wantlist. If I go hunting for another, it'll be for something closer to $40-50.

Fakes / reprints: With no stars in the set itself, there's low risk of one faked card. You're more likely to see counterfeit sets priced for big money. Authentic singles feature a shiny finish on white stock that's thinner than your average Topps card. The Smith's and Remar PCL sets prove easier to come by, so you can start with those and then add Sommer & Kaufmann once you're familiar with the style.
Posted by Matthew Glidden