This article profiles the first Topps All-Star Rookie Team, selected and announced in late 1959. I've researched Topps subsets and on-card advertising recently, but hadn't found an easy reference for the 1959 "rookies," especially the subset of rookie trophies that first appeared on 1960 cards. Topps appears to have promoted it using both Topps Chewing Gum and Bazooka brands, first referring to it as "Young America's All-Star Rookie Team" on ballots.


Willie won the 1959 NL Rookie of the Year award after a torrid second half. He appeared in just 52 games, the fewest ever by a non-pitcher ROY winner, but served a key role in keeping SF close to LA and Milwaukee through the season's final week. McCovey debuted too late for a 1959 Topps card, but thanks to the late-season nature of their All-Rookie Team, became a shoo-in at first base.


Pumpsie Green's best-known as the guy who integrated MLB's last team to integrate, the Boston Red Sox, when he took the field on July 21, 1959. Like McCovey, his debut came too late for the 1959 set, which would've been printed by that time.


Jim played enough in LA to garner a high-numbered 1959 card, but switched teams before the year was out, becoming our second Cleveland player with a 1960 trophy. Jim never returned to the bigs after 1959, so these are his only two Topps cards.


Koppe's striking a pitching pose on his 1959 card, but played infield throughout his career.

Willie moved to Boston early in 1960 and enjoyed the best hitting of his career. Washington selected him in their 1961 expansion draft, but moved him to Cleveland in 1962, ultimately splitting his six year career across four AL franchises.


Not just any right-handed pitcher, this is the elder brother of HOF Gaylord Perry and was almost as good, winning 215 career games. Thanks to team changes by Johnny Romano and Jim Baxes, Perry was Cleveland's third representative on the ten-man Topps All-Star Rookie team.


Jim is just one of several guys with Topps rookie cards before their Topps All-Star Rookie card. 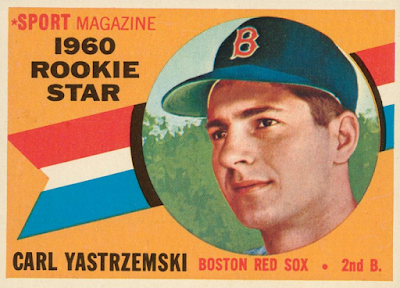 If 1960 Topps #316 wasn't enough McCovey, he picked up a second card in 1960's high series as a SPORT Magazine All-Star Selection.


Note the 1960 Topps All-Star subset was chosen by SPORT Magazine, not MLB itself. Willie didn't appear on either roster for the 1960 MLB All-Star games (July 11 and July 13). Trivia double bonus!
Posted by Matthew Glidden

Great write-up, Matthew. These are right in my wheelhouse. I became a 'fan' of Joe Koppe when doing my post of his '59 card. Someone pointed out that he posed for the Topps photographer wearing a 'lefty' glove for his '64 card. He's an interesting guy.

Oh, very cool! 1964 Topps #279 Joe Koppe does indeed have a lefty glove. I bet he's one of a handful of shortstops even shown wearing southpaw gear, given the positional disadvantage.