2014 marks two World Series "anniversaries" for John McGraw. First, it's been 110 years ago since he turned down a post-season series against AL pennant-winners Boston, calling his NY Giants champion "of the only real major league." 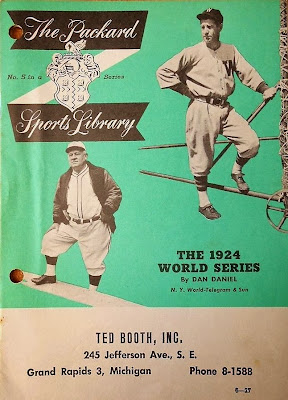 NL executives later realized how much they stood to gain financially by staging post-season exhibitions and McGraw went on to manage in several World Series, winning three. His final such appearance (1924 vs. Washington) is captured on #5 in this "Sports Library" series of digests produced by Packard Motor Cars. (McGraw is at lower-left, opposite Washington manager Bucky Harris.)

In 1924, New York marked the first time a team had played in 4 straight World Series, with the Giants winning in 1921-22 and losing to the AL in 1923-24. The series itself went a full seven games and the photo below captures Washington on the cusp of winning it all, as Earl McNeely's grounder bounced over third and scored Muddy Ruel in the bottom of the 12th inning. (It'd be Washington's only franchise title until after their move to Minnesota.) 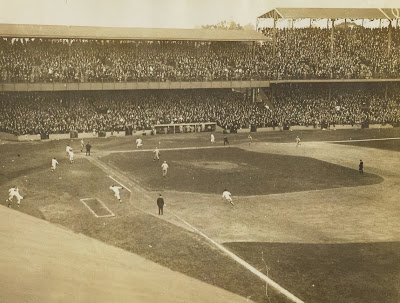 Packard Motors printed their 5"x7", 16-page magazines for placement in showroom lobbies and service stations from 1951 to 1957 and this #5's from the initial year. Its 2-hole punch implies it came in a binder with other Sports Library issues or car sales info. Issues without punches, like Babe below, probably went out by mail.


Packard customized most magazines with a business address and many issues in the hobby today survive thanks to collectors who obtained autographs from 1950s stars like Ted Williams and Jackie Robinson on their covers.


While not exactly cards, these issues make for interesting Americana, as an overlap of the post-WWII boom in automobiles and sports fandom. Individual articles read like time capsules from an era of classic sportswriting and are worth checking out just for that sweet 1950s art style. 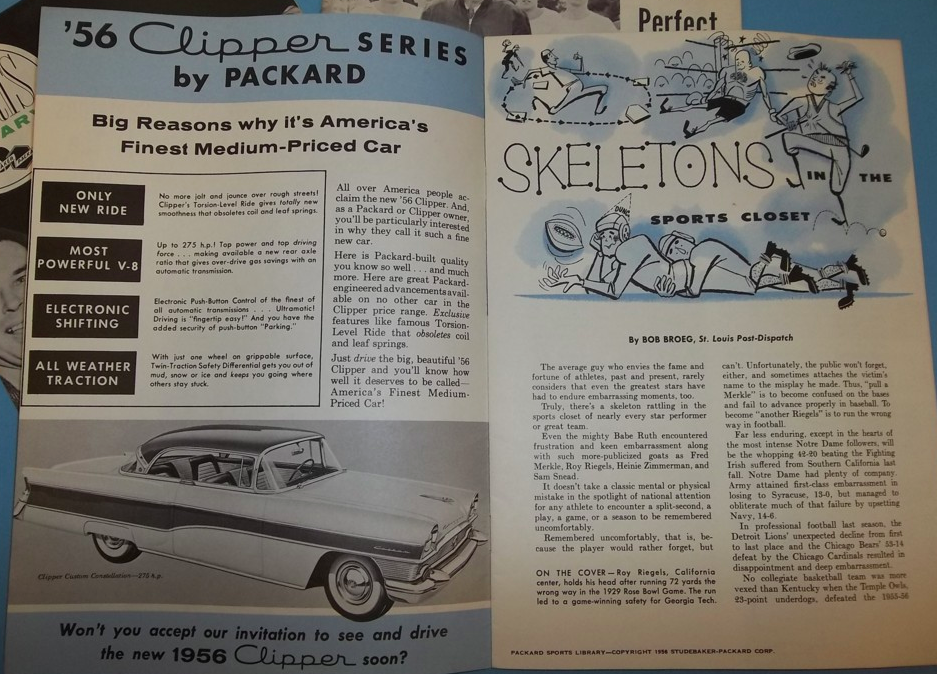 Value: Single issues are easy to find on Amazon or eBay and non-baseball covers generally cost less than $20. Baseball stars in decent shape, like the Ruth cover above, might run more.

Fakes / reprints: Haven't seen any reprints in the marketplace.
Posted by Matthew Glidden