As baseball's dog days soon breeze into harvest season, so did I miss recognizing this blog's eponymous fifth anniversary earlier this season. How could this happen! Did I forget my glove?


With nearly 800 posts under my belt, it might be the shrinking number of vintage (pre-1981) sets to profile that left my brain unawares. By the numbers, only a few dozen type cards remain unaddressed and several of those prove so obscure that I've yet to see even a photo to represent them, let alone put my hands on a real card.


The good news is that even if we run low on vintage stuff, modern companies printed everything under the sun thereafter, so there's no end of potential post-1981 profiles. (Indeed, I have a plethora of potential post-vintage profiles.) 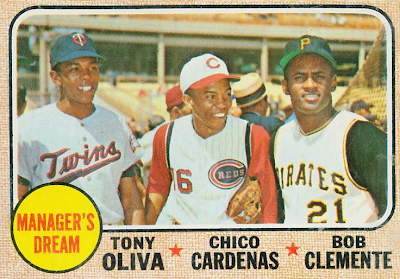 ...or perhaps I'll segue into a multiplayer type collection. THERE ARE SO MANY GOOD ONES. (Including this one in part to remind you September 17th is baseball's Roberto Clemente Day!)

In belated honor of the fifth anniversary, let's give something away in the theme of giving things away. Readers might know Spike Owen's one of my favorite players from his days with Seattle, his first of several teams in a long, productive career. 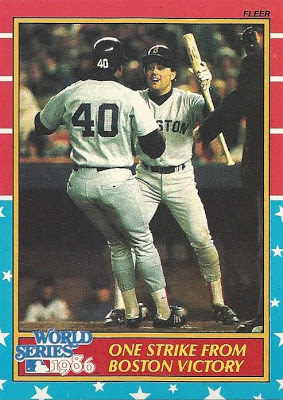 The Mariners ultimately sent Spike and teammate Dave Henderson to the Red Sox in mid-1986 and that's the pair of them celebrating a near-title in Fenway Park. So close, but not quite!

Seattle received this gentleman in return, who took over Spike's position at short, and went on to frustrate both my adolescence and the Mariners and Pirates franchises. 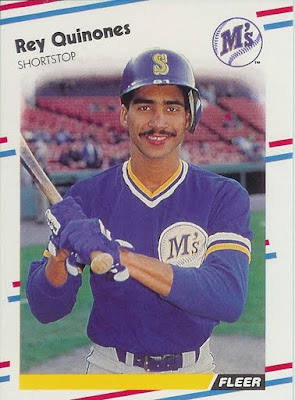 Pitchers & Poets covered the complicated on- and off-field life of Quinones in A Hard Man To Understand. In short, Rey couldn't focus enough to play at short. What he had in skills, he lacked in consistency. Those impressed with flashes of success also felt blocked with inscrutable obstacles. So close, but not quite.

HOW TO ENTER: What's your favorite story of almost, but not quite? Add a comment with the ignominious card goof, near-perfect game you attended, or other famous (or in-famous) baseball stumble, as in "1986 Red Sox" or "Rey Quinones" or "blog that forgot its own anniversary."

WHAT YOU WIN: Selected cards from your favorite vintage team (and I'll try to include a Hall of Famer)! That's the next best thing to a prospect that delivers on his promise.

I'll take "almost, but not quite" nominations until the end of Friday (Sept 20) and pick a random winner from all entries. Good luck and thanks for reading!
Posted by Matthew Glidden

Everyone thought the mighty (and juiced) A's would bash the weak little Dodgers.

They were already beating us in Game 1 via a grand slam by Jose Canseco, and they had the best closer in baseball on in the 9th, Dennis Eckersley.

Kirk Gibson had something to say about that, and the A's went down in "Almost" history.

My "almost but not quite" was the from that same 1986 postseason. My Angels were one strike away from winning the entire series when Dave Henderson hits a home run. The Angels even scored 1 in the bottom of the 9th, only to lose in the 11th inning...and game 6....and game 7.

so many to choose from - i will never forget the image of reggie jackson as an angel standing on the top step of the dugout without his glasses in 1986, ready to charge onto the field to celebrate the angels winning the pennant, only to see dave henderson go deep.

however, my almost but not quite contribution consists of the can't miss triple crown prospects that the dodgers' farm system (albuquerque in particular) teased us with. sure they were sometimes serviceable major leaguers, but we were brought to expect superstardom from mike marshall, greg brock, candy maldonado, sid bream, billy ashley, and even ed amelung. close, but not quite.

I'm going to go with Todd Van Poppel. This guy was almost the next Nolan Ryan... but not quite. As an A's fan... I invested heavily in this guy. Just another reason I don't collect for investment purposes anymore.

It was the first modern set I collected upon returning to collecting. I bought cards like mad and finally, finally completed it that year amid an avalanche of doubles ...

... Only to realize that #297, Alex Gordon, was pulled from the set early on and only available to big-bucks collectors -- therefore making my complete set incomplete. Forever.

This was the only time that the Expos finished in first place. And there was no post season.

Almost, but not quite a champion.

I lived in Ohio back in 1996 and a friend wanted to go up to see the Tigers/Red Sox game on Sept. 18. He used to intern for the Red Sox in Florida.

It was a three-hour drive up to Detroit and I - for one of the only times ever - just wasn't up for what it would take to get up to the game.

Roger Clemens struck out 20 that night.

Thanks everyone, a great collection of almosts! Writing up the winning summary now and will post it by end of day Monday.