If you've never been to Salt Lake City or studied Mormon history, it's good to file away the knowledge that Utah settlers credit seagulls with a miraculous saving of their 1848 crops from insect devastation. Locals celebrated those heroic gulls with multiple monuments and other honors, including an eponymous renaming of their AAA franchise in 1975. 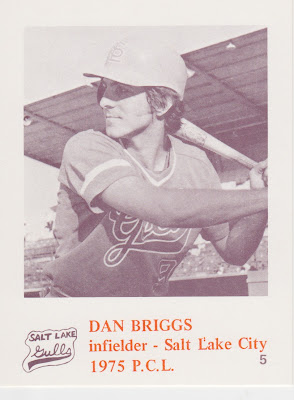 At the time, those Gulls farmed for California's Angels--appropriate for their miraculous reputation--but I know them better as early 1980s stewards for up-and-coming Seattle prospects. Personal favorite Spike Owen first appeared on a baseball card wearing their bright duds. 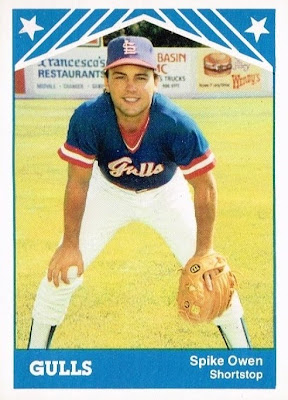 Caruso treated today's Salt Lake City issue like their other 1975 PCL team sets, with apparent exception of their hand-drawn logo next to Dan's name. That's no disrespect, as I enjoy its primary school charm: we could all use 15 minutes of recess Wiffle-ball at one time or another. Compare it to Phoenix, though, and you assume SLC didn't provide an "official" version in time for card publication.


Dan Briggs started playing pro ball in 1970 at age 17 (!), so owned significantly more experience than your typical 22 year-old by 1975. His ensuing 7-year tour of duty in the majors included a 104-game effort for San Diego in 1979 that stands out as underpowered for someone who played nothing but 1B and OF, with 77 OPS+ and just 8 homers (career stats). He reputedly played through injuries throughout that season and hopefully found it worth the pain. (Most pros choose that path at some point during their careers, a lingering fact of the sporting life.)

Caruso printed 20 cards for this team, including manager (and former Dodger backstop) Norm Sherry. Those with MLB experience are in bold.

Value: This #5 cost $2 at MinorLeagueSingles.com and team sets run $10-20. 1970s & 80s collectors will recognize some of the roster names, but none achieved enough MLB success to drive up its overall price.