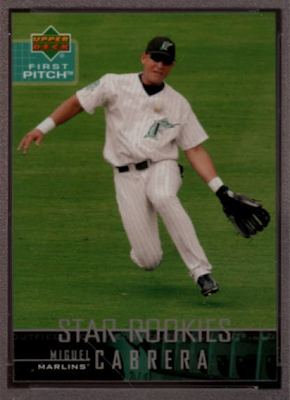 Miguel split 2003 between third base and left field, so I assume this photo shows him as an outfielder, fielding something hit low in front of him.

So many players get labeled as "Star Rookies" and so few deliver on those projections, year in and year out, but Miguel sits atop that group for the last ten years. (2013 marks the start of just his 11th season; it feels to me like he's been pounding the ball forever.)

Upper Deck published this 300-card set to coincide with Opening Day, in part to get young guys like Cabrera shown in "real" uniforms as quickly as possible (set checklist). 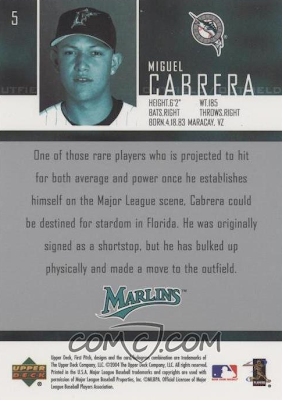 This card text actually undersells Cabrera, who certainly "bulked up physically" and can hit darn near everything within reach. "FUTURE TRIPLE CROWN WINNER" might've been tough to predict, though.

Value: Awesome hitter or not, this #5 costs just $1 on COMC.com and other stars run about the same.
Posted by Matthew Glidden