Before MLB.tv, before designated hitters, before talk radio, before the 20th century, there was still baseball. "Founding era" baseball. Well-dressed gentlemen who played dirty. Outlaw leagues that ignored each others' signed contracts. Cheating, drinking, and megalomania. Yellow journalism baseball. For all our ragging on today's public sports obsession, at least there are hundreds of other channels to watch. 19th century fans flocked to baseball in part because it put the ne'er-do-wells into a public arena with nominal rules and umpires to enforce them.

In their collective infancy, 19th century pro teams rose and fell on the strength of individual stars, who blossomed for a few glorious years, only to destroy their bodies or reputations with intemperate living and fall back to earth amidst media scandal. (21st century satirist-writers like @OldHossRadbourn base their commentary on the era's expected insouciance of body, mind, and liver.)

Printed in what I consider the most significant city of baseball's first century--no offense, New York--these page-sized "cards" came with midsummer issues of The Stage, a Philadelphia weekly newspaper. 19th century photography worked best in formal studios, so Mr. Cross and many in The Stage's 14-player set look like college lettermen plucked from a turn of the century yearbook. Look at that natty suit, polished hair, perfect tie knot, and buttonhole chain. Excelsior!


Lave Cross largely avoided his contemporaries' flameouts and racy headlines, but  The Stage would've covered him often as a 14-year pro in their fair city, suiting up for different local teams: the Philadelphia Athletics across three leagues (American Association, Players League, American League) and later the Philadelphia Phillies, which play then as now in the National League (career stats).

A Wisconsin native and son of Czech immigrants, he received the moniker Lafayette Napoleon Cross to approximate and replace his birth name Vratislav Kriz, with the nickname "Lave" striking a middle ground between Lafayette and Vratislav. (I assume The Stage either got "L. M." wrong or he was known publicly with a different middle name and initial.)

This "Stars of the Diamond" text fills in some Cross family backstory, including a prominent mention of recently deceased brother Amos (d. 1888), who shared backstop duties with Lave for the 1887 Louisville Colonels. According to SABR research, oldest brother Joe Cross also played a single game for Louisville that year as a positional fill-in from a Cleveland semi-pro team. They're not quite three Alou brothers in the same outfield, but that many siblings on one team still stands out in baseball history.


We can infer The Stage's "Kelly's at the Bat" poem adapted "Casey at the Bat," but tailored to fit 19th century star King Kelly, then of Boston's Beaneaters. Stage performances of "Casey" debuted in 1888 and proved immediately successful, inspiring paeans and variations of all sorts in the 120+ years since, including this stamp in the Post Office's "Folk Heroes" series. 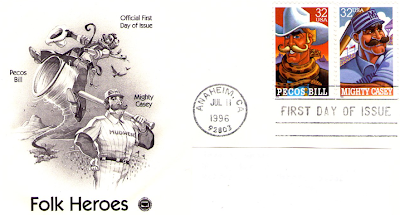 Value: Old Cardboard estimates VG singles at $185, but pricing will vary given the set's extreme scarcity. Most modern transactions come via auction, so "real" value changes by whim of the bidders. The text supplements are also significant as original sources for stories of 19th century baseball, so collectors also compete with historians.

Fakes / reprints: Haven't seen any in the marketplace, perhaps due to the set's obscurity.
Posted by Matthew Glidden