As a young collector I knew "Topps" meant baseball cards with gum and gum with baseball cards; the two came as one, often because they were stuck together. You chomped on the gum and relished its 30 seconds of sugar flavor, about long enough to riffle through the players themselves.


Unfortunately for 21st-century collectors, those chalky pink slabs calcify after a year or two, leaving a bad taste in the mouth of anyone brave enough to try a piece from the 1980s.

Most Topps packs compounded the "sticking" problem with wax-sealed paper, which often stained the card surface, so rubbing residue off with a sock is one of the earliest things I learned about their "maintenance." (Just in case, here are some more ways to remove wax stains.) 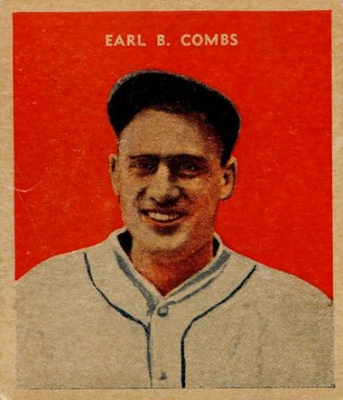 There's no gum on Mr. Combs, partly because Boston-based United States Caramel Company packaged these high-contrast players with slabs of caramel, each package containing one card and one piece of candy.

Not every card survived the candy packaging process unscathed. I assume that's a gooey caramel streak across the face of #28 Ed Brandt, perhaps from being stacked under another candy pack. 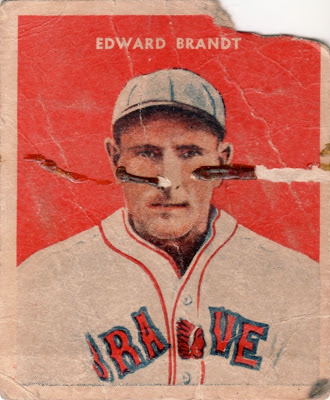 U.S. Caramel produced this scarce set of 32 sportsmen (included 27 baseball players) and offered a baseball or glove in exchange for complete sets. Like other promotions, the "catch"--no pun intended--was #16 Lindstrom, who they severely short-printed. Very few of his cards survive today, a white whale for what's already an expensive hunt.


Collectors consider this set complete at 31 cards, leaving a gap at #16. It's the same attitude taken by most in building the 1933 Big League Gum set, which Goudey originally issued without #106 (details in my Closer Look at Goudey for 1933-34).

Once sent to the company for a redemption, U.S. Caramel stamped (and sometimes hole-punched) each card to prevent their reuse for another prize.


The Net54Baseball.com discussion on canceled Caramel cards includes this detail on two known Lindstroms. Click through for the provenance and pricy details. 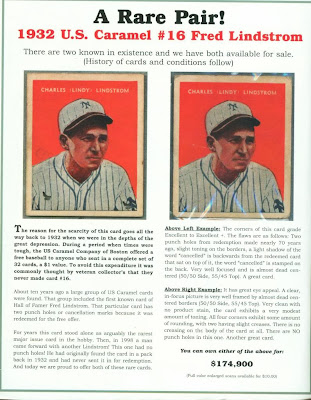 1932 or 1933? Early catalogs dated U.S. Caramel's Famous Athletes to 1932, thanks in part to their lookalike 31-card run of American Presidents, which capitalized on the 1932 election fervor. Card backs reference events during and after that season, though, so the set's properly dated 1933. See this discussion for more. Based on context, I believe American Presidents debuted during the 1932 campaign (with newly-elected FDR added as #31) and Famous Athletes followed in the spring of 1933, but I doubt they fared well against Goudey's beautiful 1933 Big League Gum cards. U.S. Caramel never attempted another baseball set and might've been sucked up in a 1930s wave of acquisitions by candy conglomerates that knocked most small businesses out of the market.

The Famous Athletes set proves so rare that I've been unable to find my own #5 and today's front/back scans come from a (super expensive) eBay listing. If you've got a Combs to trade, let me know!

Value: Low-grade cards run at least $30 and will vary considerably, given their short supply. Superstars like Ruth and Gehrig go off the charts, well into the thousands. #16 Lindstrom is one of the hobby's rarest and most expensive cards.

Fakes / reprints: Unfortunately, plenty of fakes exist for Ruth and probably most of the others. Be very careful when purchasing Caramel cards; expert forums like Net54Baseball.com are one place to seek guidance in rare card shopping.
Posted by Matthew Glidden