Between the 1910s tobacco era and Goudey's landmark 1930s gum sets, candy and toy companies made most of America's baseball cards. Pennsylvania's own American Caramel Company produced several and this #5 comes from their 1927 "set of 60" issue, designated by collectors as E126. There's more to it than meets the eye, which I examine after name-checking E. T. Cox. 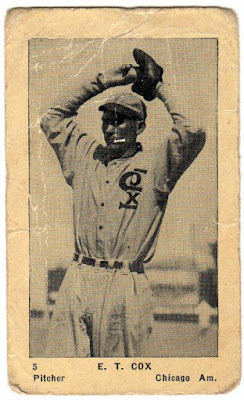 Ernest Thompson Cox pitched a single MLB game for Chicago on May 5, 1922. He faced 6 batters, walked 2 of them, gave up a hit, allowed 2 runs, and...that's it. E. T. never appeared in another White Sox game and, according to available stats, didn't play in the minors either following his 1922 big league appearance.

310 Pythian Place, a blog about Birmingham, Alabama history, provides a play-by-play account of Cox's single MLB appearance in "One Game -- One Inning." (It also mentions teammates mislabeled him as "Elmer," which is significant later.)

How and why did Cox pitch just one inning? I compared rosters for that year's AL teams and Chicago shuttled a lot of pitchers through their 1922 staff. The 1st place Yankees used a grand total of 8 pitchers for all 144 games. Cellar-dwelling Boston used 10. The White Sox used 18 and most made less than 5 appearances. All that roster shuffling speaks to oddities in the front office. Chicago endured the Black Sox trial and banning of eight players in 1921, so I imagine player management and finances proved chaotic in 1922. Chicago could've trimmed travel costs or other expenses by signing in-town players to the briefest of contracts. Perhaps something even more obscure was going on. 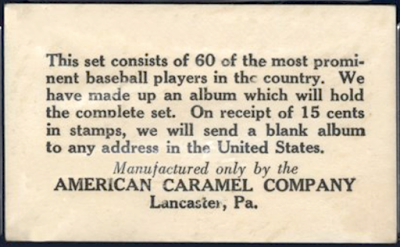 The 1927 E126 card back promotes their collectors album for "60 of the most prominent baseball players in the country." Since E. T. Cox hadn't played in 5 years, they're playing fast and loose with the truth. In fact, American Caramel's 1927 set is 90% re-cropped player photos from 1922, numbered #1-60. Match names in these galleries and you'll see what I mean.

Could a mistaken name or photo be how "E. T. Cox" ended up on a card? As mentioned above, American Caramel reused many photos and he first appeared in 1922 as "Elmer." 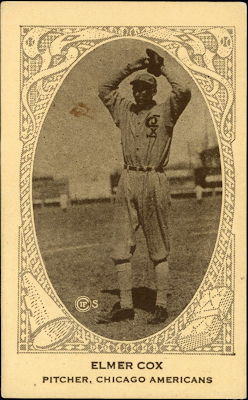 Did American Caramel get the right "Cox?" We have a few other 1920s candidates.

Future MLBer Elmer Joseph "Dick" Cox played outfield for Brooklyn in 1925-26, but toiled in the PCL as a Portland Beaver in the years American Caramel would've obtained this photo. An Oregon-based outfielder wouldn't strike pitching poses for the 1922 White Sox. No real chance that's our guy.

Leslie Warren "Les" Cox pitched two career games for Chicago, both in September 1926, so he's a peripheral match for someone named Cox appearing in this 1927 set. It's believable an American Caramel employee reused this 1922 card based on Chicago's 1926 roster containing a guy named "Cox."

George Melvin Cox pitched a full 1928 season for Chicago, six years too late to be on a photo from 1922 or earlier. If American Caramel printed E126 in 1928, they could've again picked E. T. based on last names alone.

Back in 2004, collectors on the Net54 baseball card discussion board asked similar questions about E. T. Cox in the thread, "E126: Who is card #5?" They arrived about where we are now, with a smattering of overlapping baseball stats and one enigmatic photo of a White Sox pitcher. 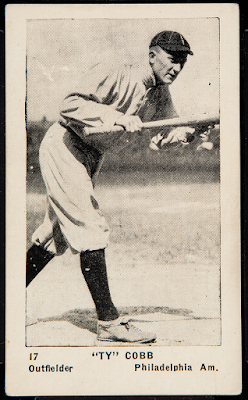 That Net54 conversation hints at another reason American Caramel dusted off their 1922 photos and revamped them for 1927: stars Ty Cobb had just joined the Philadelphia A's, and Tris Speaker, the rival Washington Senators. 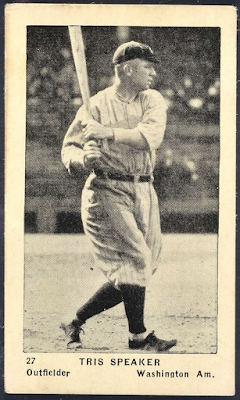 Cobb and Speaker weathered game-fixing allegations following the 1926 season (see Cobb's SABR bio for details) and both announced plans to retire. When baseball commissioner Mountain Landis declared them innocent of the gambling allegations, they followed lucrative contracts to new cities for the final years of their legendary careers.

It's a good bet that Pennsylvania-based American Caramel capitalized on Cobb's arrival in Philly to rush out a smaller version of their earlier sets, updating current teams and adding album-based encouragement for collectors to get all 60 cards. I can't find an E126 album online (yet), so expect they adapted these similar E120 albums from 1922.

As mentioned earlier, I think E. T. reappeared for 1927 because American Caramel might've referenced a recent White Sox roster with a pitcher named "Cox" (Les in 1926 or George in 1928, depending on actual year of printing) and mistook them for E. T., so he got a second card out of it.

I also have a theory about why E126 cards prove so scarce today. That on-card (IF)S copyright by Cox's foot stands for International Features Service, a William Randolph Hearst-owned source of news wire photos and publisher of baseball strip cards from the 1910s and 1920s. (IFS also appears in my W516 post about Cobb and Speaker.)

When American Caramel printed their 1922 E120 "set of 240," photo attribution appears on every card, some for IFS and some for other photo sources. None of their re-cropped 1927 E126 "set of 60" photos show these attributions, which could've raised legal issues and cut short the distribution of cards.