Looking decidedly wistful here, and anything but "grim," today's guest kicked off his major league career with a bang, going 20-6 in 1954. This earned him AL Rookie of the Year and he followed with three more years of relative success, posting a 45-21 record in pinstripes before being traded to Kansas City. 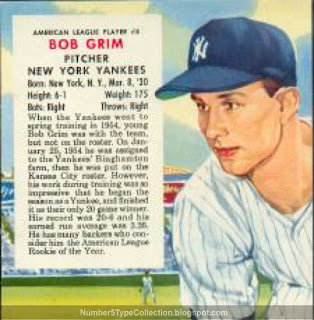 His Wikipedia entry notes how arm troubles prompted a successful conversion to relief pitching, which no doubt prolonged his career in a sport where young players can fall off the planet in no time at all. Grim's career eventually ended in 1962 with the A's, but his stats change notably after those four seasons in New York. I wonder where today's pitching strategies and medical care would've taken him, compared to the 1950s and four-man rotations.

Like other Red Man issues I've covered, this over-sized, beautifully painted card design stands out among oddballs. They look a lot like Topps' 1953 cards, but repeated for several years running. Each tobacco pouch included a card ("for your boy!") with the chaw ("not for your boy!"), and printed one numbered set per league. See the RedManCards.com checklists for the full star power of the day and pictures of some ad placards. (Lest you think I made up the "for your boy" stuff.)
Posted by Matthew Glidden