Today’s guest, John Frederick Anderson, is the first player I've written about who eventually took his own life. That tragic end came some forty years removed from Fred's half-dozen years in the game and a single 1917 World Series appearance, two brief and unremarkable innings in Game 2 against the Chicago White Sox. (The pale hose went on to win the series 4 to 2.) 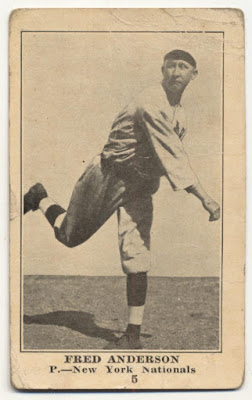 Fred pitched his three seasons under legendary manager John McGraw. Apparently, he took a little something extra to the mound, frequently throwing spitters. Check out this colorful account of the team’s 26-game winning streak in 1916, which includes comments on ’s “moist ball” and several good performances. The Baseball Crank blog adds a more statistical bent to the amazing run of Ws, noting he started three times and no doubt appeared in several others, as one of the league’s leading mop-up men. 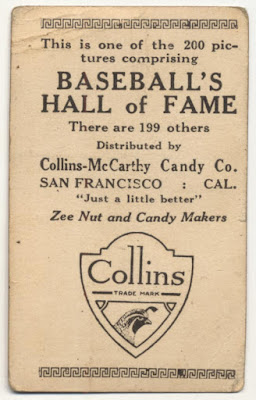 E135 cards don’t show up very often. I finally purchased a trimmed #5 (with a blank back) from an online store last year for $30. It presents a little better in real life than what you see in the scan, given the ancient, plasticky gloss they used in the first quarter-century. Some include an advertising stamp for the Collins-McCarthy store on the back in black ink.

The whole set’s rare enough to counterfeit, something I originally feared of Fred. West Coast dealer Mark McRae helped add confidence to this particular example. Careful examination of the printing details shows the right kind of dot pattern, something handled differently by modern printers and presses. Modern gloss also holds up better, while the surface of a handled E135 appears to “fracture” into tiny pieces like a shattered mirror (or 1970s Kellogg’s card). I don’t expect PSA to ever pass judgment on Mr. Anderson, but if it happened, they’d look for similar indicators—right after cashing my large check, of course.
Posted by Matthew Glidden