Starting in 1972, TCMA found growing success with direct-to-collector sets built from their collection of vintage baseball photo negatives and sold via mail order. Some of their work covered classic teams like these Boys of Summer-era Dodgers and others reprinted scarce issues from our hobby's past. According to TCDB.com, they produced 26 different sets in 1974 alone!

Today's set includes a bunch of guys who suited up (and had their pictures taken) for Brooklyn's pennant-winning 1952 squad. 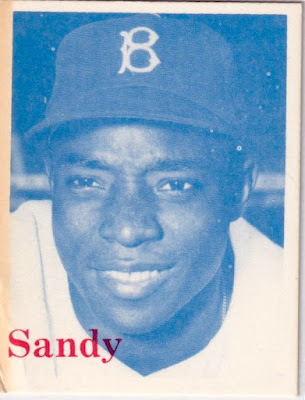 Crinkle-nosed rookie Sandy Amoros played 20 games in 1952 as a late-season addition, often pinch-hitting or taking over on defense. His last appearance that year came during Brooklyn's 5-5 tie on September 28th, something impossible in today's era.
TCDB calls this set "unnumbered" on its checklist, yet Sandy's uniform #5 makes this a type hit in my eyes. Sometimes collectability overcomes sensibility. 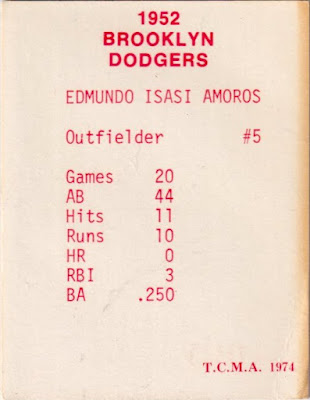 Look for two card ink variations, blue and black, with examples below. Little surprise that Jackie Robinson's cards rank most popular with people who know about this TCMA set. 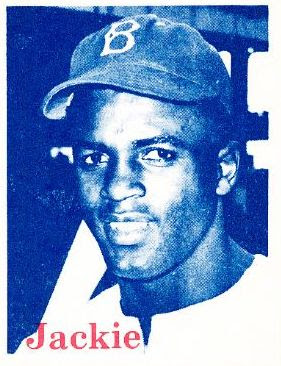 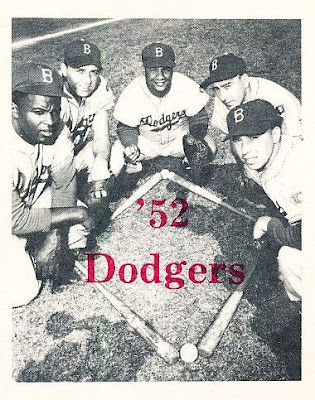 This group shot of Brooklyn's 1952 infield (Jackie, Gil, Campy, Billy, and Pee Wee) grouped around bats and balls now includes four HOFers following the 2022 induction of Gil Hodges, with just third baseman Billy Cox on the outside looking in.

Value: My Sandy cost $1 from the oddball table at a local show, a price I'm happy to pay for hard-to-find hits. Jackie and other Dodger stars will run more.

Fakes / reprints: While color variations show that TCMA itself printed more than one run of cards, it's hard to imagine anyone else reprinting such an obscure set.

One of the first TCMA sets I bought through mail order as a young teen. I am always surprised by the prices they go for now, even though relatively modest. ... I didn't know about the B&W varieties until a few years ago.

Cool to hear you picked this one up! Did you buy it when first offered in 1974? TCMA strikes me as a company that listed their sets for many years after creation, with the ability to print more as needed. (I suspect their black & white versions came out sometime well after 1974.)