What can we say or write about Jamie Moyer at this point? Probably not much more, as Toronto released the 49 year-old vet this week, thanks to his high minor league ERA and continuing propensity to allow homers. One Seattle newspaper is polling fans: should Seattle sign him for a day and let him retire as a Mariner? (I'm game to let him pitch.) 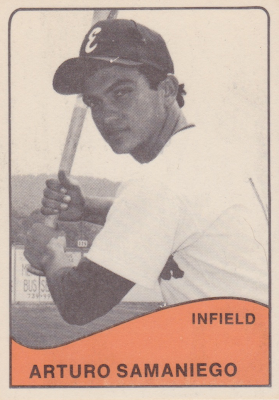 To put Moyer's baseball tenure in context, consider Arturo Samaniego, who spent 3 summers in the low minors for Boston (career stats). Released in 1980 at age 20, Arturo moved on to other pursuits. I can imagine jobs, businesses, and raising a family. It's now 32 years later and Arturo is 52, just 3 years older than Jamie. (Counting this year's 3-game stint with Norfolk, 19 years passed between Moyer's two trips through Baltimore's minor league system; the first came with Rochester in 1993.) 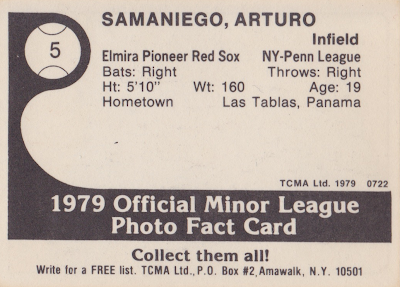 Value: Like most of my 1979 TCMA cards, Arturo cost $2 at MinorLeagueSingles.com. Low-A teams like Elmira produce few stars and only two players on its 1979 roster made the bigs, Jackie Gutierrez and Tom McCarthy, so the team set's affordable at $20-30.